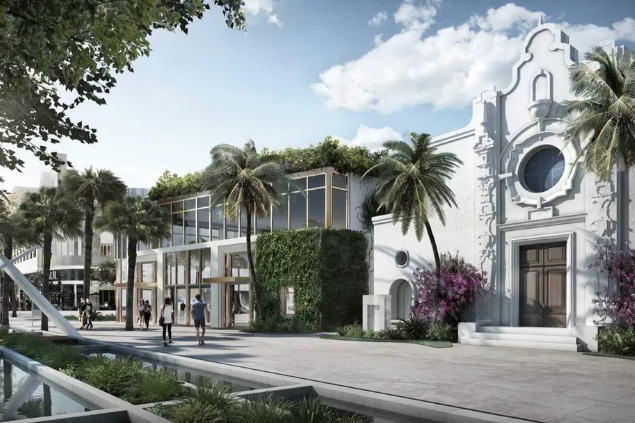 There was much brouhaha when news dropped that the courtyard of the Miami Beach Congregational Church, that stately old church on Lincoln Road, could soon be filled with a three-story retail project, with roof garden.

Miami Beach’s oldest church, designed by Walter DeGarmo with a rectory building added later by Russell Pancoast, never really paid to much attention to its courtyard, a space left over from multiple planned but never executed additions that at one time some decades ago had had a blah fence slapped up around it, and was almost always empty. Now, if developer Tristar Capital gets its way (and of course nothing’s for sure until the fat lady sings) that little square of grass could net the financially imperiled church $100 million over the next 50 years.

The architectural design itself, by firm Touzet Studio, and the landscape design by Raymond Jungles, however, had remained largely unseen by the public, as it wended its way through Miami Beach’s approvals process. That is until now. Here ye, here ye, are the plans, elevations, axonometrics, architect’s statement, and etc. Love it or hate it, judge for yourself, after the jump.

The design language is modern and is made up of limestone, glass and finely articulated metalwork. The location on a prominent corner of Drexel and Lincoln. We studied corner building typologies of Lincoln road and determined it was important to respect the tradition of building to the corner on Lincoln Road and giving the corner some prominence. We purposely angled the Lincoln Road retail facade from Lincoln Road and terraced back to maximize views of the church from Lincoln Road. Much of concept for the architecture drew direct inspiration from the DeGarmo church and the Pancoast Rectory. The design of the corner feature is inspired from the fluted entry of the Pancoast Hice Hall It will be made of custom cast glass pieces that will cast a soft glow at night. The metal work on Lincoln will be a play on the telescoping nature of the beautiful mission architecture of the church.

We are also very much looking forward to working with the church and restoring the facade of the original structure and bringing this landmark building back to its former glory. The church will open directly to Lincoln Road and Raymond has proposed a planting plan of coconut trees that will bring back the design of the original front landscape. We have also spent a great deal of time looking at the design of all the spaces adjacent to the church as we believe all these spaces very important for the life of the church and they provide a serene and contemplative space for public use as well. Raymond has incorporated as much sensitivity and great garden design into the design of these important sacred spaces.

Since the 1920’s the history of the church – there have been many schemes for development of the lawn. Pancoast once designed another building to sit on this site but it was never built. We are really excited about the amazing roof garden that Raymond has designed to accommodate church functions and special events. The roof garden allows them to reach out in a completely different way to the cultural and spiritual life of 21st century Miami Beach.

We think this project will not only be great for the church but also be a strong catalyst for revitalize the entire area.—Touzet Studio