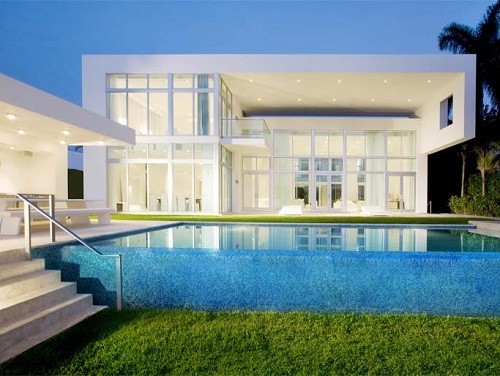 The data comes from HoopsHype. In case you’re wondering, it’s Kobe Bryant filling out the top five with his California mansion coming in at second.

Here’s a look at Bosh’s Touzet Studio-designed Miami Beach mansion. He bought the home back in 2010 shortly after signing with the Heat for a cool $12.5 million, almost $3 million more than Bryant paid for his second-place home.

Here’s the $9.4 million mansion Bosh owns in Pacific Palisades, California. He bought the home in 2012, but, according to a Realtor.com report, he’s renting the resort-style pad out for $45,000-a-month.

LeBron James’ Coconut Grove home is the fourth most expensive in the league. He bought it in 2010 for $9 million. With 12,178 square feet of living space, the manse features six bedroom and eight-and-half baths. It includes a gourmet kitchen, wine cellar, paneled library, home bar, glass-tiled infinity pool, an 8-foot crystal chandelier, and a guest house.

Though it was reported back in 2010 that Wade bought his La Gorce Isle home for $10.6 million (which would have made it the second most expensive), HoopsHype says it’s only worth $8.9 million. The home is just blocks away from Bosh’s place.