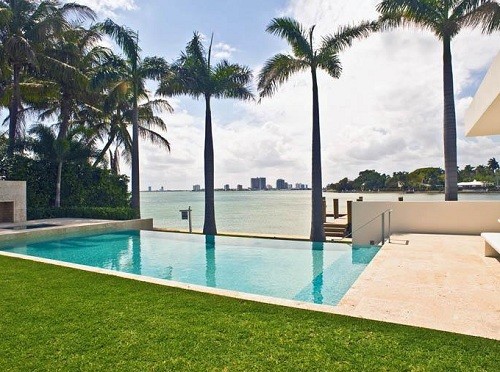 Chris Bosh is officially a resident of Miami-Dade County. The Miami Heat star has bought a brand new seven-bedroom mansion along Miami Beach’s North Bay Road, according to The Herald. The modern looking pad designed by Touzet Studio, currently decked out in all-white, features a gourmet kitchen, gym, elevator, courtyard gardens, heated infinity pool and a covered summer kitchen and barbecue area. Bosh bought the place for a cool $12.5 million, and, yes, we’ve got your look inside.

According to the listing on real estate firm Engel & Volker’s site the house was listed for just under $15 million. Though, the discount isn’t much a surprise in this market. Bosh has been interested in the house for a while, and reportedly proposed to his fiance here.

The North Bay Road neighborhood is also home to members of the Bee Gees and Matt Damon. Team mate Dwyane Wade is apparently interested in moving to the area as well.

A view from the back

The dinning room has a nice view of Biscayne Bay