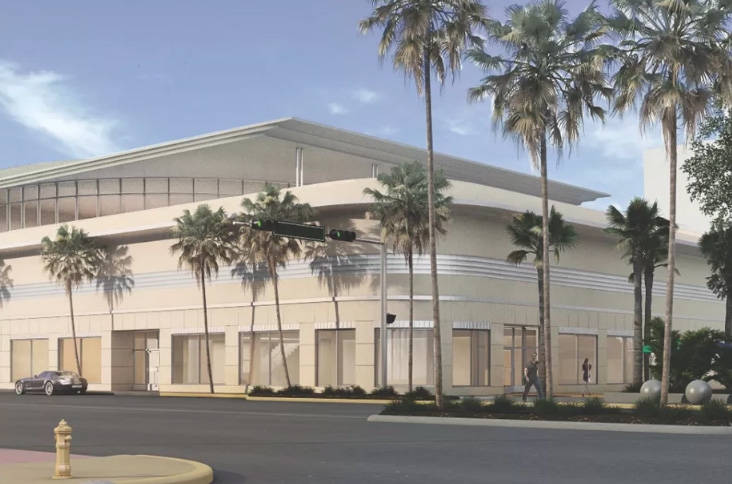 The ArtCenter South Florida’s former 800 Lincoln Road Building, which originally was Miami Beach’s first Burdines Department Store and only the second store in the former chain’s history, is getting a well-designed restoration and expansion by developer Tri-Star Capital that will likely return it to retail use. Once you’ve gotten past the five stages of grief for the old, artsy Lincoln Road and realized that things aren’t so bad for Art Center South Florida which still has a second location on the Road as well as $88 million, mountains of money, take a look at this sexy temple to shopping, designed by Touzet Studio.

The Touzet Studio design restores the building’s front and side streamline moderne art deco facades as well as many of the original historic interior details. The original black terrazzo floor is being repaired and restored where needed. Obviously the maze of artists studios that is currently inside the building will be cleaned out, but the historic mezzanine will also have its share of alterations. In the old Burdines it swept through the space, leaving the main, double-height volume open and monumental. Now that sweep will be reduced to a very small swish and the grand interior eliminated in search of salable square footage. Luckily the historic staircase will be saved, historic railings will be retained where possible and retrofitted to current safety codes, and replaced with duplicate railings where necessary.

A rear addition will absorb what is now sort of just empty (loading/unloading?) space next to Lincoln Lane South and extend above the structure to create a modern third story addition that is set far back from the facade of the historic structure. The addition has a broad and smoothly curving glass facade under a deep eve that mirrors the thin deco cornice of the original structure. Discreet and demure, the addition is damn sexy when seen from Lincoln Road and when occupied from within, with its luscious rooftop terrace, although blocky when seen form the rear. They could have considered opening that up a little and utilizing the bucolic southerly views over South Beach’s art deco district. But that’s where the mechanical junk is being hidden instead.