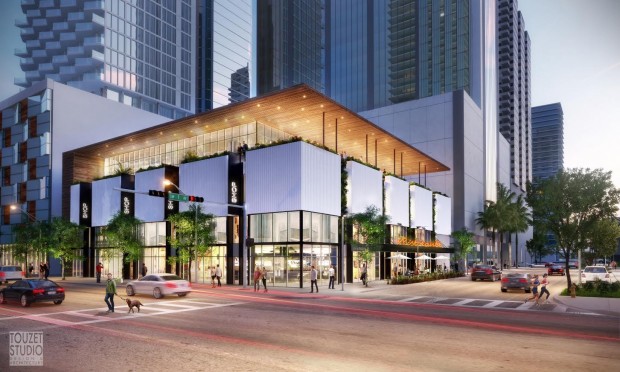 Records show company called 90 SW 8th Street Enterprises paid $750,000 for the property in 1993. Arnaldo Cantero III of BGRS Commercial Real Estate Advisory brokered the deal. The building is across the street from Brickell City Centre, and within walking distance of Mary Brickell Village and the Eighth Street Metromover station. (The retail at Brickell City Centre is slated to open in November.)

Fuller and Pinilla also own the retail property across the street that includes the Toasted Bagelry and Deli, and Blackbird Ordinary. “The opportunity didn’t happen by happenstance. We had good firsthand data [of the Brickell market],” Fuller said.

They plan to close on the building in the fall of next year. Cantero and Seth Gadinsky of Gadinsky Real Estate are in the process of leasing the space. Asking rents on the ground floor are $125, $60 on the second and third floors, and $80 on the roof – all per square foot, triple net, Cantero said.

They plan to deliver the project within six months after closing. They declined to provide names of potential restaurant and retail tenants, but said they have received interest from international brands and high-end restaurant concepts out of Los Angeles and New York.

While they won’t provide onsite parking, the developers have identified about 300 spaces in the area.

Barlington remains active in the Brickell neighborhood, Martin said. The company has acquired, developed and managed more than $100 million of commercial real estate in Miami, including in Little Havana, where it opened a mixed-use apartment building and the venue Ball & Chain.