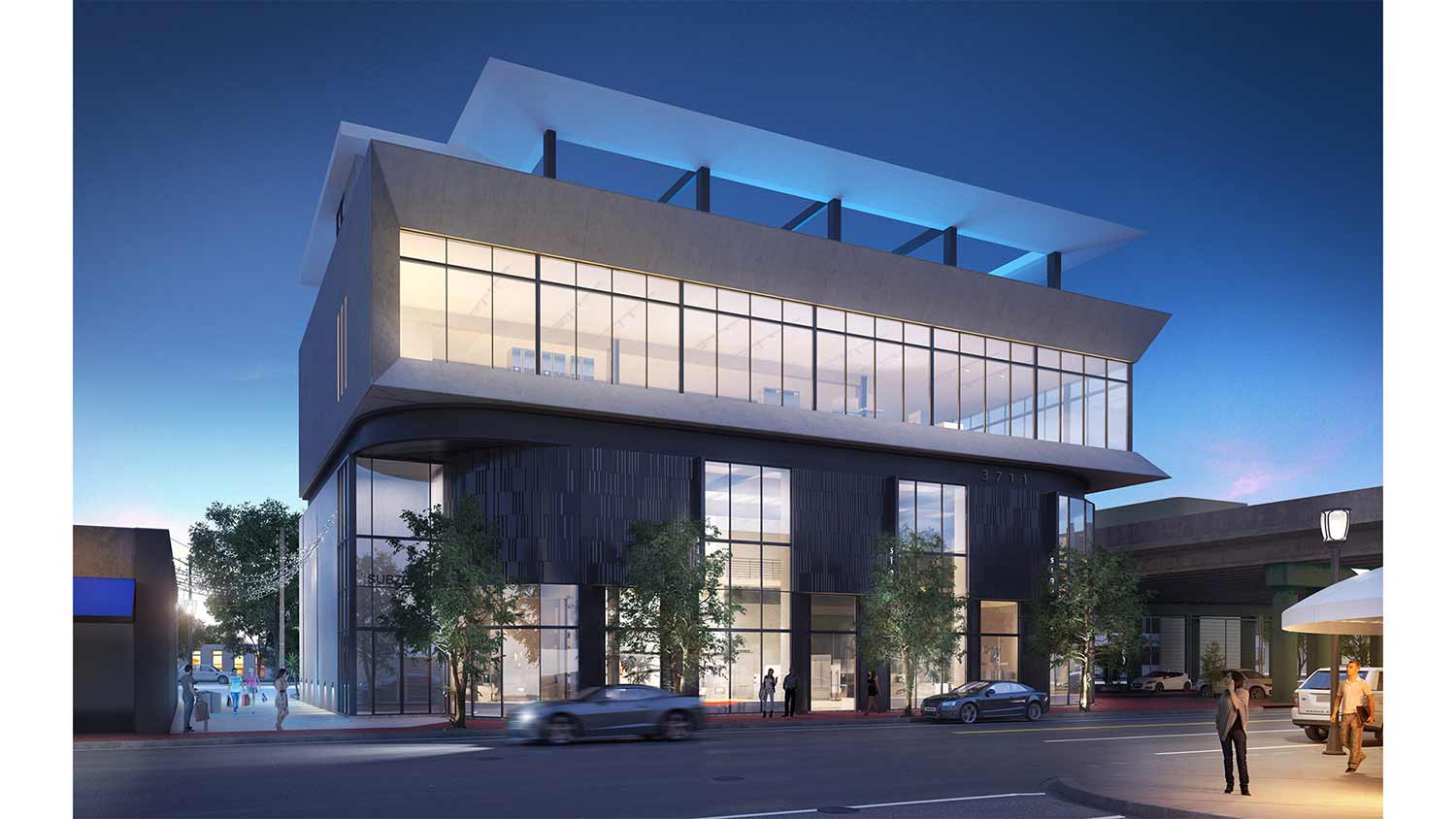 We often think of architecture in Miami as a symmetry between water and sky, hovering, distilled by subtropical light, detached from earthly constraints — from the ground plane, from traffic and social unrest. It’s all about the surf and the whiteness of sand and the multimillion-dollar water view. It’s all about the infinity pool, the goddess in white, the broadly cantilevered balcony, the lap pool, the subaqueous glow, the illusion of infinite suspension: physical, economic, environmental, social … until one day, the cycle completes itself, sweet water turns saline, and the mangrove resumes her sovereignty.

In fact, our first experience of a building is usually not from an ocean liner or the lofty perspective of an osprey. This being Miami, it more typically comes from the grittier perspective of the car, framed by a windscreen, moving past at high speed, or pulling up to a valet parking stand.

This is often an overlooked and misunderstood perspective, one that was thoroughly canonized in postwar novels like Kerouac’s “On the Road” and celebrated in more academic studies like “Learning from Las Vegas,” a 1972 treatise on the commonplace co-authored by Robert Venturi, Denise Scott Brown and Steven Izenour, who believed there was something to learn from the highway billboards, strip malls and drive-in restaurants that they dubbed “roadside eclecticism.” Venturi saw a grab bag of vibrant new metaphors for the modern city. “Anomalies and uncertainties give validity to architecture,” he wrote.

World-renowned architects and developers have come to Miami and elevated the automotive anomaly to high art, with so many iconic parking garages that signal a kind of civic disconnection. But it’s not all bad. A new, high-speed aesthetic is transforming the south side of the Design District, offering the potential for a more incremental, in-fill kind of development.

Driving west from the beach, coming off the Julia Tuttle Causeway, you suddenly find yourself in a dystopian gauntlet of weirdly vertical buildings that rise precariously close to the elevated highway, seemingly looming over the shoulder in some cases. At 65 miles per hour, the effect is oddly titillating — if somewhat benumbing and distracting — as you try to maneuver lanes and keep focused on the road ahead while texting a friend and whizzing past an oddly narrow building with white lace-like perforations on one side, a giant billboard and the fluttering gold facade of a multi-level parking garage on the other side.

While impossible to take it all in on a first pass, the structures — built for the most part on less expensive “throw-away” lots — constitute some of the most interesting new directions in Miami urbanism as they stake out a different kind of edge condition, a distinctly non-beach paradigm within an ever-expanding context.

The gray-brown structure with the large billboard is by Shulman + Associates. The original building on Northwest Second Avenue was a 1920s showroom with a quaintly arched entry. A slender structure has been glommed onto the south side, racing up more than 90 feet to create a commanding presence over I-195’s multiple lanes of east-west traffic. The east side is all glass; the west and south sides have a giant wrap-around wall for a billboard that presently holds an artist-designed sign for the nearby ICA museum. It is a pure example of “building as sign,” similar to R. Venturi’s 1967 proposal for the Football Hall of Fame, an unbuilt project in New Brunswick, New Jersey, that took the form of a giant scoreboard.

“The Billboard Building exploits its location to maximum effect,” says Miami architect Allan Shulman, who lived in Tokyo for a year while studying architecture with Nobuo Hozumi at Waseda University. He admits to being influenced by the dazzling, high-speed effects of the Shuto Expressway that runs through Tokyo with its flashing signs and riotous urban vitality. “Why does a highway have to present wide-open spaces and broad vistas instead of a well-defined corridor as spatial experience?” asks Shulman. “I prefer the embrace of buildings.”

The white building on the south side of I-195, just across from the Billboard Building, is a showroom for Brown Jordan, an outdoor furniture company. The architects of Miami’s Touzet Studio created a white counterfoil to the hectic movement of the elevated highway with a series of box-like forms that step up from Woodson Mini Park — a patch of green wedged within a busy three-way intersection — mitigating the small triangular lot and the highway’s linear sprawl.

“The cadence of the street is small one- and two-story buildings,” said Jacqueline Gonzalez Touzet, principal partner in Touzet Studio. “We didn’t want the building to be like a massive spaceship landing on the site.”

The lowest section is clad in local oolitic limestone, followed by a wrap-around band of panels made of ductal concrete perforated with a pattern that mimics the native pine trees that originally grew on the site. The architects wanted to bring light inside the showrooms to recreate the effect of dappled light coming through the canopy of a pine forest. (The ancient pine forest that once grew on the site was a symbolic theme throughout the project, and all millwork inside the building was made from recycled Dade County pine).

A third-level showroom opens up to the highway itself with a roof-deck that overlooks the nearby speeding traffic. The view creates a vaguely reckless sensation, like standing in a pit stop at the Indianapolis 500.

Touzet Studio also designed the two-story structure at 3711 NW Second Ave. as the flagship showroom for Sub-Zero, the deluxe kitchen appliance company. The building is now under construction directly across the highway from Jordan Brown and just to the east of Shulman’s billboard building. The second level of 3711 is cantilevered so that it floats just above the edge of the highway and will appear to passing motorists as a living, throbbing entity, with programmed projections designed to make the walls fluctuate throughout the day and night in contrast to the changing colors of the sky.

“You have a captive audience when they’re driving on the highway,” said Touzet. “You can’t distract [drivers] too much, but you can direct their gaze.”

Miami’s automotive obsession extends at least as far back as the Great Depression, when the “Tin-Canner” migration of winter tourists drove Model T Fords down from the frozen north, often camping out in makeshift settlements along the beach. “Electric lights are hung at intervals between the palms. …” wrote Kenneth Roberts in “Sun Hunting” (1922). “Beneath them are parked automobiles of all sizes and shapes. Some are bloated and swollen out of all semblance to an automobile, others have spouted great tent-like fins at the side or rear.”

Roberts calculated that even then, Miami had at least one car for every seven-eighths inhabitant.

As a result, the multi-level parking structure became one of the city’s signature building typologies. Since they don’t have many functional necessities — other than ramps, a staircase and elevator — architects and developers feel a certain freedom to improvise. In other cities, this kind of structure is often relegated to a minor, ancillary role. In Miami, cars are given the VIP treatment, and the sonnet form of Miami architecture may well be the public parking garage.

A 1949 photograph by Ezra Stoller, the great architectural photographer, shows a multi-level parking garage in downtown Miami. It’s the absolute bare minimum: red columns supporting concrete slabs, designed by Robert Law Weed and Associates. The sides of the structure are completely open except for slender metal railings, so that the various models — pale green roadster, wood-paneled station wagon, wine-red sports coupe —are fully fetishized, perched as they are in full view against the astringent blue sky. It’s a strangely beautiful image: the cross-section of an American obsession, fully revealed.

Today Miami Beach requires parking structures to be buffered by some sort of screening, as if the very sight of cars stacked above one another might offend the faint of heart. An open structure like the 1949 Weed garage is unacceptable, even though, somehow, Herzog & De Meuron got around it when they designed their über garage for 1111 Lincoln. With its open-frame structure, flaring fin-like supports and Piranesi-style complexity, 1111 became an instant high-design landmark, one that signaled the “New Miami” when it opened in 2010.

Zaha Hadid’s Collins Park Garage — think of a spiraling Guggenheim Museum for cars — might have challenged the supremacy of 1111 Lincoln if not for the fact that it never got built. Then there’s the Rem Koolhaas (OMA) six-story cheese-grater on Collins Avenue in the Faena District, an elegant sculptural form with its perforated coral-type cladding that serves as a reflective foil for shadows and sea-brewed light, while inside the Maseratis and Lamborghinis enjoy privileged ocean views.

For the outer facades of the Torino Garage at 400 Collins, English architect Brandon Haw has designed an Op-Art effect, due . Subtle gradations of pastel hues are muted by a filigree of white vertical fins with varied spacings — á la artist Victor Vasarely — that create the illusion of rhythm and horizontal movement. The visual effects ripple and change as the viewer moves position. Haw selected the colors from the historic palette designated by Barbara Capitman and the Miami Design Preservation League in the early 1980s, so while thoroughly modern, the structure blends in with the Art Deco context.

Back on the mainland, in the Design District, Museum Garage will offer an overlapping cluster of architectural treatments hung across the outer skin of a 900-car parking structure (across the street from the ICA on Northeast First Avenue and Northeast 40th Street). Interlocking puzzle parts by Jürgen Mayer wrap around the corner with red-black-and-blue graphics and merge with the concoctions of five other designers, including a Baroque explosion of cartoon-like icons by Nicolas Buffe, and a cleverly devised screen of actual cars suspended in a state of perpetual gridlock by Spanish architect Manuel Clavel.

But what does it say about our culture that some of the most innovative architecture in this city is in service to, even veneration of, the car? (Consider the the Porsche Design Tower, in which specially designed elevators carry tenants’ luxury automobiles up to their living rooms.) All of it is a kind of masquerade in which art and design is used to camouflage a dirty little secret: that Miami has the seventh worst traffic and one of the most inadequate public transport systems in America, leading to an ever-expanding carbon footprint, and eventually circling back in the form of flooded basements and higher tides.

I wonder what kind of city we are building? Is there a comprehensive plan, a future vision, a light-rail connector, or water taxis flitting brightly across the bay?