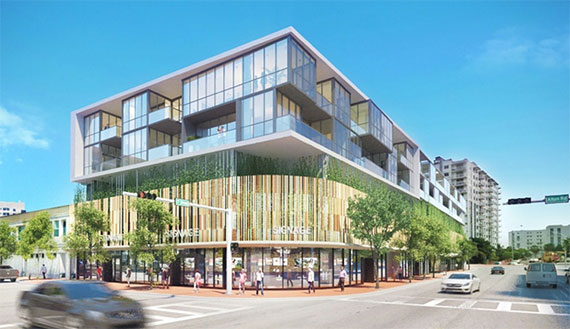 The Miami Beach Design Review Board on Tuesday approved plans for a mammoth two-block, five-story mixed-use project that will straddle the corners of Alton Road, 17th Street and West Avenue.

The project is being built at 1681 and 1683 West Avenue and at 1698 Alton Road, site of the former Shell station. It will have 28,142 square feet of retail space, 36 residential units and approximately 200 parking spaces.

Rock Soffer and other family members of Turnberry Associates and principals of Elion Partners, who acquired a series of parcels at the site including the Shell station site for $8 million in 2015, are the backers of the project. The partners bought several of the West Avenue parcels for $7.9 million in 2013. Elion is one of the partners developing West Palm Beach’s newest condo tower the Bristol.

Last month the Miami Beach Planning Board reviewed the project but deferred action on it until later this month. The board expressed concerns over any active uses for an air bridge that will link portions of the building over an alley that will serve as the main pedestrian entrance to the structure off of 17th Street. Lawyers and designers on the project said Tuesday they had modified plans for the building to meet those concerns, but the project will still have to go before the full city commission in June before final approval can be granted.

Members of the Design Review Board praised the Touzet Studio design of the project, but board member John Turchin expressed concerns about the size of the project, noting that the scale of buildings along Alton Road was fundamentally changing the area.

Turchin also expressed concern over the single parking entrance to the building on West Avenue, echoing neighbor’s concerns over traffic backups on congested West Avenue. Rock Soffer noted however that creating an additional entrance on Alton Road could make the traffic situation in the heavily congested area even worse.

The planning board will examine the project next on May 24.