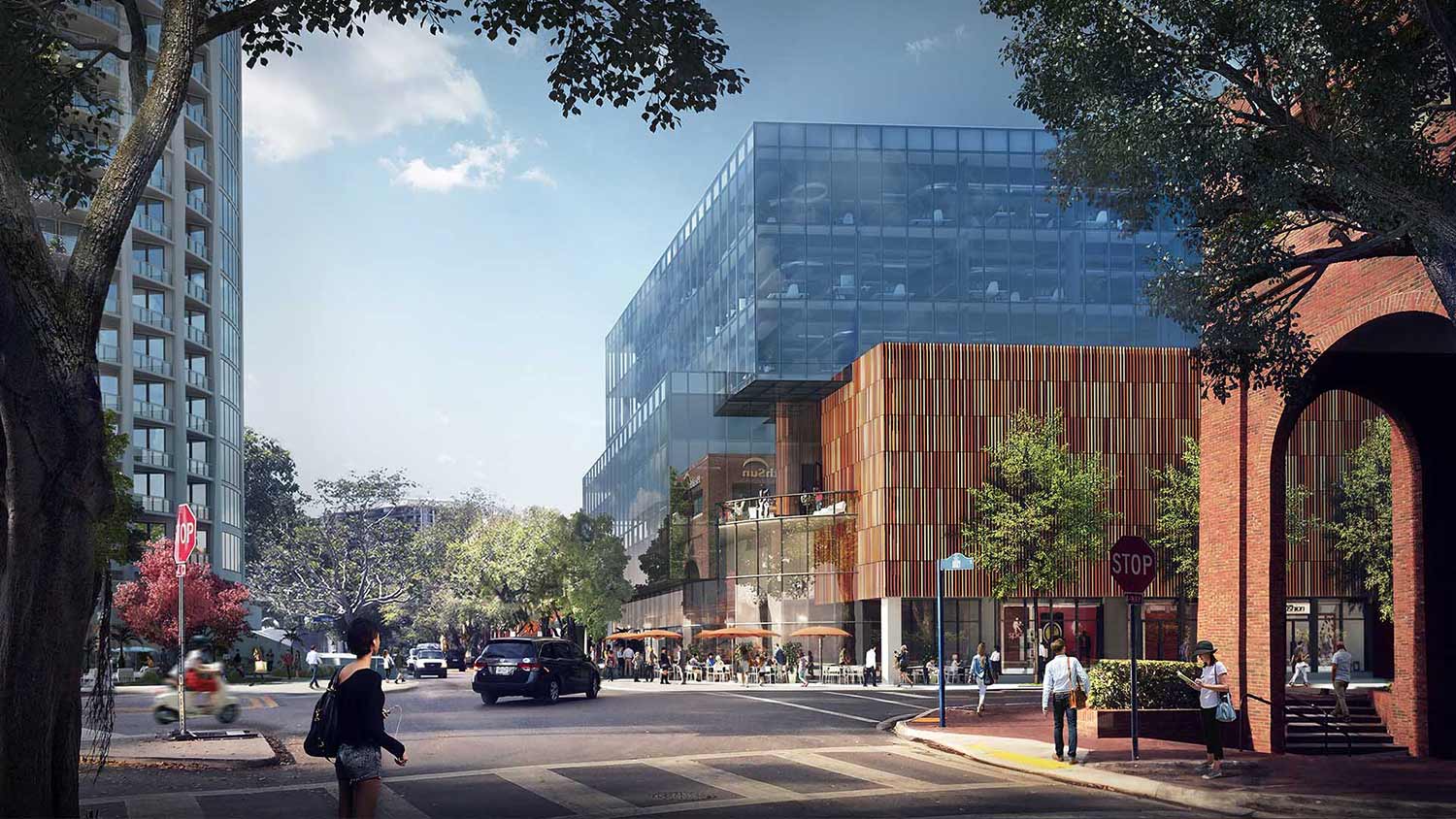 As Coconut Grove regains its appeal as a thriving commercial district, two of the neighborhood’s deepest-rooted developers are transforming a 1980s-era parking garage into a contemporary mixed-use building that will meet growing demand for office space and prime retail.

Developed by Terra in partnership with Mayfair Real Estate Advisors, the Touzet Studio-designed complex — named “Mary Street” — will include 75,000 square feet of Class A office space, reimagined retail storefronts at street-level while retaining a public parking garage. Construction will begin in early 2017.

Mary Street will mark the first delivery of new Class A office space in central Coconut Grove in more than 20 years, following the completion of Terra’s new Grove at Grand Bay condominium two blocks away. Mary Street and Grove at Grand Bay, along with Terra’s Park Grove residential complex now under construction nearby, represent a new wave of design-driven urban infill development reflecting Coconut Grove’s strong residential demographics and allure as one of South Florida’s most walkable urban neighborhoods.

“As a longtime stakeholder in Coconut Grove, Terra believes safeguarding the neighborhood’s unique character means creating sustainable developments, walkable streetscapes, and a mix of commercial and residential uses that allows people to live and work in close proximity,” said David Martin, Terra president. “Our plan for Mary Street will be consistent with that vision. Equally important, our proposed redevelopment of a dated site will generate additional tax revenue for the city without exploiting the site’s full allowable density while adding new parking capacity throughout the Grove.”

The building’s design will transform the existing parking garage’s 1980s aesthetic into a modernist structure featuring a terracotta brise soleil whose vertical patterns mirror the contours of a seashell, and transformed retail storefronts that will enhance visibility and accessibility from the street.

Touzet Studio’s involvement with Mary Street represents a homecoming for principal Carlos Prio-Touzet, a Ransom Everglades School graduate who worked as a writer for the Village Post newspaper in the 1960s when the publication’s offices were located on the same site.

Since then, Touzet Studio has spearheaded the design of some of Miami’s most notable properties, including 1800 Lincoln Road, the new Nike and Apple stores on Lincoln Road Mall, and renovations of the Delano Hotel and the Raleigh Hotel in Miami Beach. Other projects include the design of Wynwood Plant, a new mixed-use development in Miami’s Wynwood neighborhood, and Brown Jordan’s flagship store in the Design District.

“Our design for Mary Street is inspired by the same characteristics that have long defined Coconut Grove — walkable tree-lined streets, the relationship with the water, and an embrace of arts and culture,” explained architects Carlos and Jackie Touzet. “By approaching this as an adaptive reuse project, we were able to preserve the village-like vibe at street level while creating unique office spaces above and reducing our impact on the community. The result is a design that respects its surroundings and enlivens the neighborhood, rather than changing it.”

The inventory will be a welcome addition for a Coconut Grove office market currently experiencing a shortage of Class A office space, with a total vacancy rate of only 3.4 percent and average rental rates hovering near $38 per square foot, according to JLL Research.

“While Miami-Dade’s office market has been historically dominated by professional services firms, Coconut Grove has emerged as a hotbed for media and creative services companies over the past decade,” said Chris Dekker, who will lease and market Mary Street on behalf of Terra and Mayfair Advisors.

“Offering users architecturally distinctive design and flexible floor plans, a critical mass of retail and restaurant options within walking distance, and access to some of South Florida’s most in-demand residential areas, Mary Street will be one of the market’s most desirable office addresses.”

The same can be said for Mary Street’s revamped retail, which will total approximately 20,000 square feet of frontage along Mary, Oak and Rice Streets. The space will cater to chef-driven restaurants with café seating and unique retail serving Coconut Grove’s residents, visitors and daytime workforce. The retail component will connect the luxury residential corridor along S. Bayshore Drive with the neighborhood’s urban heart concentrated along Grand Avenue and Main Highway.

“Coconut Grove’s commercial trade area is home to more than 150,000 people and average household incomes in excess of $110,000 per year, which are some of the strongest demographics in South Florida,” said Lyle Stern, president of Konover Stern, who will lease Mary Street’s retail space. “Today’s consumers are increasingly spending their time in authentic neighborhoods that are pedestrian-friendly and populated with locals, which is why there’s so much demand among retailers for projects like Mary Street, and Coconut Grove in general.”