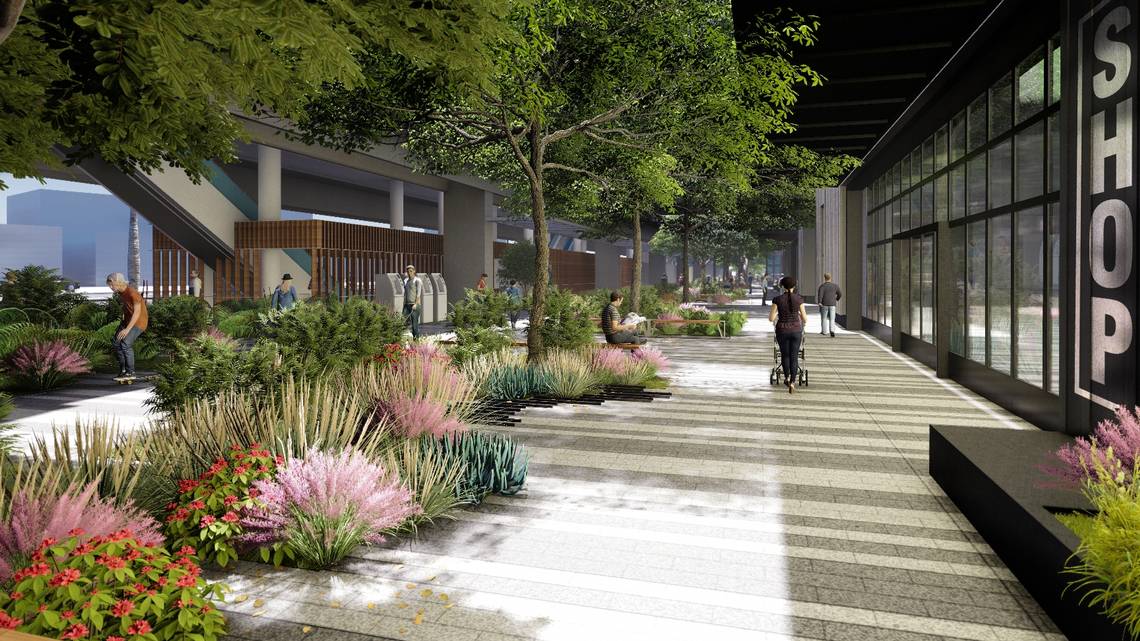 Coconut Grove is getting a new Metrorail station, and it could be entirely solar-powered.

The $200 million privately funded station, one of the flashiest and most valuable in the county’s plans to redevelop its Metrorail properties, would be connected to a 330-unit apartment building, as well as retail space and a covered bus station. The plan is awaiting approval by county transit authorities. If given the go-ahead, developer David Martin, of Terra Group, expects the project to be finished in late 2021. The project is a collaboration between Terra and Grass River Property.

Martin, who sits on Miami’s Sea Level Rise Committee, hopes the project could set a precedent in the city — a region with the most to lose to rising seas but little movement in the development world to build a more resilient community.

“One project cannot save the entire county,” he said. “But if we have 10, 20, 30 projects that adopt this same methodology, we can develop a kind of pattern or criteria that is expected in our industry.”

There’s a few things that make this project notable in terms of climate change readiness, most visible of which would be the two-megawatt solar array on top of both buildings. Underneath the building, a “monster” battery the size of about six shipping containers will store 20-megawatts per hour of electricity.

If the building is built efficiently enough, that’s enough energy to power the entire building and reduce or eliminate the need for backup generators, as well as give the Metrorail the juice it needs to launch the train each time it leaves the station. Walter Meyer, co-owner of one of the firms involved in the project, Local Office Landscape and Urban Design, said powering the train launch with a battery is actually cheaper for a power company than revving up the natural gas plants for a spurt of energy.

He said a solar array and battery of this size in a city (known as an urban microgrid) would be the first in Florida. “No one’s doing this,” he said.

The plan is that the solar-powered station, a pilot project for Florida Power & Light, could also serve as a community hub after a disaster like a hurricane. Nearby residents could show up to charge their phones or bask in the AC while they wait for power to come on at home.

Renderings of the new plans for Grove Central, a transportation hub near Coconut Grove, show affordable housing and retail space combined with access to the Underline, the Metrorail and the bus system.
Terra Group/Touzet Studio

Meyer is also in talks with the county to possibly install a waste-to-energy plant that would convert sewage into power, compost and water, which would be a first for Miami-Dade.

The building would be cooled using groundwater and rainwater. The air-conditioning unit would pump air through pipes chilled by groundwater, an old and efficient technique also known as geothermal cooling. That same groundwater, or rainwater collected on site, would be misted in public spaces to keep people cool and for watering the landscaping.

The building’s designers specifically noted the importance of building public spaces for a world getting hotter and rainier. A visualization from The New York Times shows how scientists predict Miami could see about 160 90-degree days by 2070, up from 133 in 2017.

That heat increase could be higher or lower depending on how much carbon dioxide the world keeps emitting over the years. Switching more people to public transportation is consistently ranked as one of the simplest ways a community can cut its carbon emissions, most of which are released by solo drivers.

Besides the Metrorail station, the space would include a covered bus stop and connect to the Underline, an in-development plan to build a 10-mile bike path underneath the county’s Metrorail stations.

Plans for the building include parking for cars though, both visitors checking out the stores and restaurants and residents in the building. The residential space would be split between co-living — think adult dormitories designed with shared living spaces — and market rate units, with about 15 percent set aside for workplace housing.

This would focus more development in an area likely to survive rising seas for quite awhile.

Although it’s less than a mile from the bay, climate models show the area’s coral ridge — a portion of land at a higher elevation than the rest of the county — protects the station from severe flooding until the seas rise about nine feet. Even the more extreme models commonly accepted by South Florida planners don’t show that happening until past 2100.

“You wanna promote your workforce [housing] and your affordable [housing] in areas where there’s transit, and you want to promote it in areas that are not as vulnerable,” Martin said.

The new station is part of Miami-Dade’s plan to increase density around transit and connect far-flung areas to the inner city, a strategy successfully used nationwide, including in the suburbs around Washington, D.C. The county’s resilience head, Jim Murley, wants to see these stations look more like Martin’s plan — solar-powered and hubs for the community after a disaster.

“This is Miami-Dade County in 2050 if we’re able to pull this off,” he said at an August event where experts from Columbia University brainstormed ideas to do these projects better and faster.

So far, this is the first project that reflects Murley’s vision. The Brownsville Metrorail station has already been redeveloped, and work is either underway or negotiations are ongoing for the stations at Douglas Road, Dadeland North, Northside, Okeechobee and South Miami. Next up, said county transit spokesperson Karla Damian, is a 10.7-acre vacant lot near the Miami International Airport station.

A portion of the taxes paid by neighborhoods around the station (plus rent paid by the developers) will help fund the county’s SMART plan — or Strategic Miami Area Rapid Transit— to expand public transportation in the county.

The Coconut Grove station plan is currently awaiting feedback from the county transit department. Once the plans are revised, they’ll head to the Rapid Transit Developmental Impact Committee for final approval.

Martin, a self-proclaimed activist for climate resilience in Miami, said projects like his would be big, visible examples to the city of how it could adapt to climate change.

“We need these pilot projects to see what works and what doesn’t work so we can adapt and evolve and move forward,” he said. “I think Grove Central is a piece of the puzzle.”