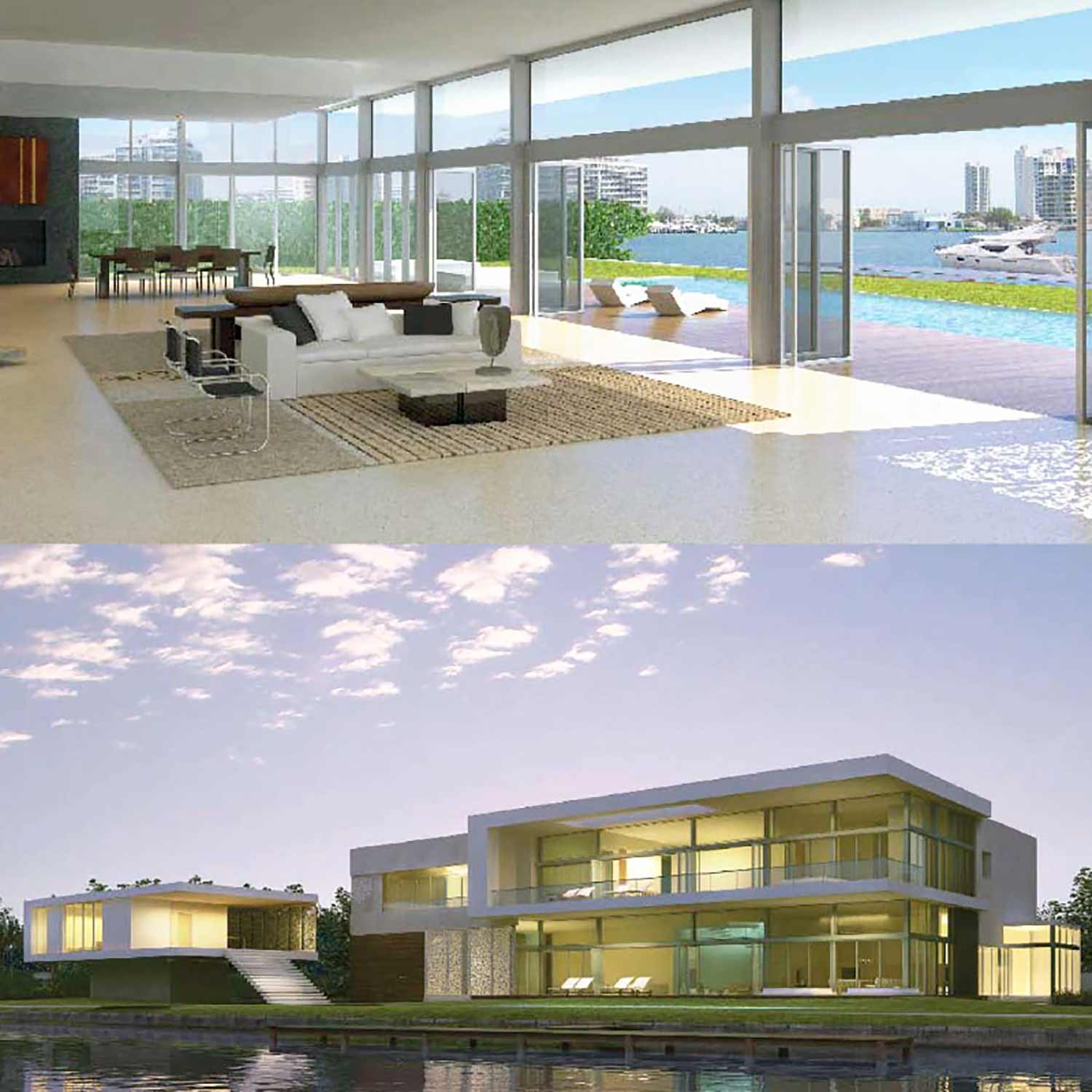 While many news outlets focus on the negatives of the current real-est ate market, the vibrant, upscale homes in Miami’s high- end luxury market prove that for the rich, there’s little to worry about.

Open up your local business section and you’ll read the worst: Interest rates are up, foreclosures are up, and the housing market is going down the drain. Well, excuse Miami Beach for not batting so much as an eyelash at said reports. Because, the fact is, the ultra-luxury real estate market is feeling no ill effects of this potentially pre-recession market.

“Everything above $5 million is COMPLETELY unaffected,” says Todd Michael Glaser, who has been dubbed the Heavenly Father of Homes for his 20-plus years of impact on the super-luxury Miami Beach real estate scene. “The wealthiest people in the market for homes are unaffected by the interest rate because they have the money up front.”

And so it is that this luxury market is not floating, but soaring, as the rest of the market treads water and comes up for air.

“Our high-end is hot and happening,” says Jill Eber, a broker-associate along with business partner Jill Hertzberg at elite Miami Beach real estate group The Jills. “We just closed on a $20 million property today on 23 Indian Creek Island. Last month, it was $16.4 million on Palm Island.”

“Miami Beach is a destination for the whole world,” Hertzberg adds. Hertzberg and Eber know a thing or two about the luxury housing market in Miami Beach, which is heating up like a midsummer’s day.

While newspaper business reports outline an economy inching toward recession, with rising foreclosures and high markups plaguing the market, Miami Beach’s glistening shores and high-style living paint a markedly different picture: one of hope, growth potential, and, most importantly, luxury.

Eber adds one caveat: “Even though it seems like there are a lot of opportunities for high-priced homes, there really are not that many. The demand for these select locations is extremely high, but potential buyers who wait are only going to lose out on the property of their dreams.”

The key, Eber explains, is the “super-luxury market,” the ultra-swank, secluded, gated-island communities such as Indian Creek, Star, Hibiscus, LaGorce, Sunset, and Palm islands, as well as North Bay Road, which is home to such celebrities as Matt Damon, Ricky Martin, and Barry Gibb. Pointing to a handful of $1O million-plus sales in the past few months, Eber says the time is right to invest in some of the city’s most exclusive properties.

“Miami Beach is just the place to be, and you can see it in our recent sales,” Eber says. “We’ve sold seven properties in excess of $1O million in the past couple months just in the Miami Beach area. There really aren’t any lulls in the high-end market because it is so desirable.”

If anyone needs an example, they need look no further than one of Glaser’s masterpieces, the residence at 2900 N. Bay Rd. that he sold to Terry Bollea, better known as pro wrestling legend Hulk Hogan.

“I find waterfront lots, knock them down, and build luxury homes between $1O million and $40 million with no buyer in sight,” Glaser says. “The home was listed, but three months before it was completed, Hulk Hogan approached me to buy the home for $12 million. It just goes to show how hot the market is.”

But there was one catch: Hogan sold the home, just under a year and a half later, for $17 million to major motion picture producer Michael Bay, who most recently produced the hit “Transformers.” This, Glaser says, is just another reason why the Miami Beach luxury market is so popular.

“Everybody wants to live here; it’s a Mindset-Madonna, Sylvester Stallone, Hogan-they all come in, know what they want to buy, and know that once they buy, there’s an easy exit strategy. Look at Hogan: He turned his home around for $5 million more than what he bought it at. It was on the market maybe for a week and a half. For me, it wasn’t even on the market! There are 20-plus examples in just the past year or so. This is no fluke.”

Then it should be no fluke if Miami Heat star center Shaquille O’Neal, the 7-foot-1, 240-pound, larger-than-life basketball great, is able to sell his property, now on the market (and represented by The Jill s, of course), in a flash. Shaq’s home, on the market for just about $32 million (he does wear No. 32 on his jersey, after all) might just be the crown jewel of the for-sale market at the moment.

“Shaquille O’Neal’s property might be the best opportunity on the market,” Hertzberg says. “His house sits on two-and-a-half acres-it’s simply gorgeous, unmatched real estate. It has an incredible gym AND an indoor basketball/ racquetball court. This home is not going to last on the market long.”

Another example would be a 50,000-square-foot property at 88 LaGorce, which was designed by renowned architect Touzet Studios.

Another example would be a 50,000-square-foot property at 88 LaGorce, which was designed by renowned architect Touzet Studios. “David Solomon of Lencor International is listing the home at 88 LaGorce, and this is literally one of the most incredible properties around,” Glaser says of the contemporary glass home. “The home has 20,000 square feet, with 12 bedrooms, 14 bathrooms, and a five-car garage.” The asking price is $25 million, but, Glaser says, whoever purchases this prime property will likely have another purchase in mind: “This home has 270 feet of protected waterfront, so that’s basically saying you can have a 270-foot mega yacht docked right on the edge of your property.”

So why is the market going beyond steady, and bordering on booming, with luxury homes selling at more than $1,000 per square foot? Glaser uses a simple analogy to the luxury car market.

Another example would be a 50,000-square-foot property at 88 LaGorce, which was designed by renowned architect Touzet Studios. “David Solomon of Lencor International is listing the home at 88 LaGorce, and this is literally one of the most incredible properties around,” Glaser says of the contemporary glass home. “The home has 20,000 square feet, with 12 bedrooms, 14 bathrooms, and a five-car garage.” The asking price is $25 million, but, Glaser says, whoever purchases this prime property will likely have another purchase in mind: “This home has 270 feet of protected waterfront, so that’s basically saying you can have a 270-foot mega yacht docked right on the edge of your property.” So why is the market going beyond steady, and bordering on booming, with luxury homes selling at more than $1,000 per square foot? Glaser uses a simple analogy to the luxury car market. “Three years ago, no production car was priced at $500,000. Now, it’s no big deal. In fact , I predict we’ll see a production car in excess of $1 million in the near future. The mindset is changing. The guy worth $1O million has a $5 million house, and the guy worth $200 million has a $5 million house. Now the guy worth $200 million wants a bigger one. That’s why you see guys like Jeff Soffer [principal developer at Turnberry Associates]: He just paid $35 million for a home in Aspen, and he has put $60 million into a home on Indian Creek, plus $12 million for the lot next door. And he bought a multimillion-dollar yacht.”

The shift in scale is noticeable in the media, where, Glaser says, “a few years ago, Ugo Colombo purchased a home with an asking price of $40 million, and it received all kinds of press-Wall Street Journal, New York Times, everything. But, a few months ago, someone listed the old Nixon estate, the “Scarface” home on Key Biscayne, for just about the same price range. But it didn’t even make the news, and it never sold.”

The reason, Glaser says, is simple: “There’s a whole new wealth hitting the United States, and the world. You have to go back almost a hundred years, to when the Fords and the Vanderbilts were building these big estates that will be talked about for hundreds of years. Now we’re seeing that it’s happening again, with guys like Bill Gates and Jeff Soffer. The increased demand will only bring up prices on high-end homes. And, what ‘s more, these are end buyers, not people trying to flip homes around.”

Hertzberg has a few trophy pieces in mind as well. She goes on to detail a list of $15 million-plus properties on Ocean Boulevard, Golden Beach, and North Bay Road, each a private piece of Heaven available to Miami’s power players who are willing to pay for a little piece of paradise.

” We just listed a property to be built on Indian Creek Island, which will probably be one of the most spectacular and unique residences in the country,” Hertzberg says. “It’s more than 20,000 square feet, with 1O bedrooms and 14 bathrooms, plus an art lounge, a media room, a full spa, gym, three kitchens-one of which is the first Italian kitchen made of solid Teak wood.

“Starchitect Rene Gonzalez is finishing the plans; construction begins in February. The house is divided into pavilions floating on water, much like an Asian resort, but with tropical, contemporary architecture. The home will have a certified green house with natural grass rooftop terraces, 14-foot German mahogany impact windows, and the most advanced technology in sound, lighting, and security. It will be the most expensive home in the history of Miami.” The project was conceived at the demand of several identified American, European, and Asian buyers with that budget in mind. Says Eber: “The buyers have made amazing offers on properties not on the market, which owners rejected because they know what they have cannot be replaced.”

What’s more, the weak dollar is making the United States ripe for international investment, where British and European buyers can take advantage of the strength of their currency. Likewise, wealthy people leaving countries Iike Venezuela also are coming to Miami to find the ultimate home.

“There’s a huge high-market value right now,” Glaser says. “Bill Joel just bought a house on LaGorce Island for $14 million, and the developer of the new Watson Island project, Mehmet Bakatar, just bought a home there as well. Now, Robin Gibb’s home on North Bay Road is under contract for $16.9 million, and the home will be completely gutted. That’s more than $25 million that the buyer is paying after renovation, and this home wasn’t even on the market. He knocked on the door and made an offer.”

Eber, of course, is extremely quick to remind us: “We have it all here: weather, water, South Beach, sports, shopping, and performing arts. If people can make it happen, Miami is where they want to be.”