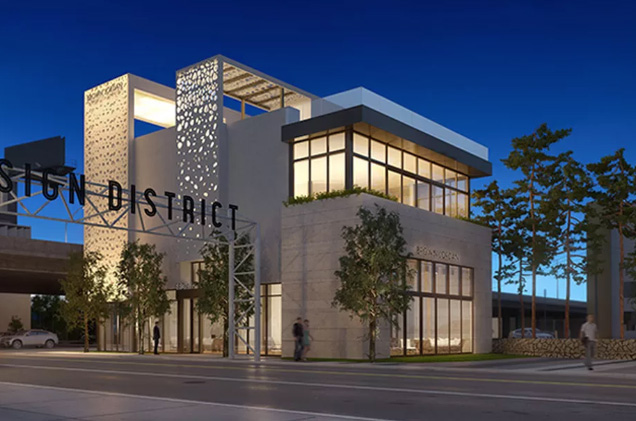 It’s pretty hard for new buildings to compete for attention in the mega-hyped Design District in the midst of Dacra’s billion plus ultra-luxe developments, the new ICA museum, and Enrique Norten’s Design 41, but there are indeed a number of smaller noteworthy District retail projects underway.

Highly acclaimed Touzet Studio who designed the striking Lincoln Road Gap building has two projects in construction. The design of 3711 NE 2nd Avenue, the site of the former Power Studios, with its cool open canopied top floor is intended to be perceived as “a three dimensional canvas or billboard to be enjoyed at different times of day or night.” The wind from the I-195 traffic flying by will assure a constant breeze up there. Just opposite, on the other side of the highway is a new Brown Jordan flagship store which again features an open canopied top floor. The site’s just behind a rundown little public park with a bright red sculpture, so that might be what the park and the giant ‘DESIGN DISTRICT’ sign in the renderings are all about. (Update: the sculpture’s gone!)

A little up the street at 3925 NE 2nd Avenue is a proposed 5 story retail building by an unknown firm with two nicely glass walled tower elements and some interesting light slits on the side. Around the corner at 45 NE 41st Street, up and coming R&B has designed a 4 story structure with dark brown or black vertical façade strut elements that would look at home in Tokyo and contrasts nicely with the prevailing lighter facades in the District. The project will eventually be sandwiched between the De La Cruz Collection on the west and the new ICA Museum on the east but its design is bold enough not to be lost in the museum maelstrom.—Donald Shockey