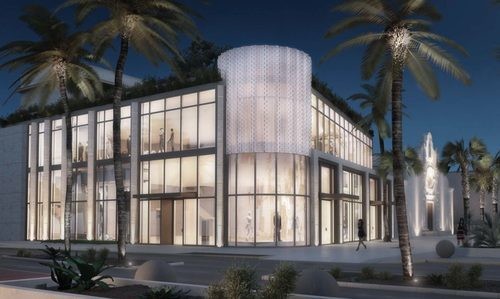 In December, we broke the news that the Miami Beach Community Church was strongly considering leasing its courtyard to commercial developers. Church leaders called the $100 million offer a “miracle from God.” Meanwhile, locals — and even some church members — said the church was selling its sanctuary for 30 pieces of silver.

Well, MBCC members eventually approved of the “miracle.” And now architects have released their plans for a two-story retail structure where the church courtyard currently sits.

The building will be a modern mix of limestone, glass, and metal. In other words, it will look like all of the other new clothing stores on Lincoln Road.

The developer on the project is David Edelstein’s Tristar, the company that’s trying to build condos in Wynwood (that decision has been delayed until April 2). Tristar has hired architectural firm Touzet Studios and landscape design company Raymond Jungles for the MBCC project.

Touzet’s sketches show that Tristar does, indeed, intend to build a courtyard atop the commercial building.

Eric Donahoe, who heads MBCC’s board of directors, called the lease “a miracle from God that he would provide this church with these types of resources.” And pastor H.E. “Hunter” Thompson said it was “a blessing.”

But a congregation member who asked to remain anonymous said he was “not impressed” by the design.

“It looks just like another H&M, another Gap store,” he said. “The Historical Preservation Society should step in and not let it go through the way it has been ramrodded through.”

The church member also objected on principle to the deal.

“That land was dedicated for religious purposes,” he said. “I realize that this was a 50-year lease, but board members have been less than forthcoming on it.

“You don’t say all of a sudden, ‘We’re going to vote on a $100 million deal but we’re not going to give you any details, just go ahead and vote, or give us your vote by proxy,'” he said, referring to the moment church members learned of the deal after a Sunday service in December.

“As for the overwhelming vote [in favor of the deal], well, yeah, you’re mostly dealing with senior citizens who haven’t seen daylight in 20 years,” he said. “They pressured them to vote for it.”

The church member said he wasn’t completely against any deal, which church leaders have said is necessary to keep MBCC afloat.

“I wouldn’t object to a partial development,” he said. “But the way it is now, with no lighting left in the sanctuary, is not right. It should be done in an open manner and put out to bid. There are a lot of things that are very hinky about it. I don’t get a good feeling about this.”